Welcome to the Inn on Bath Creek

Is Bath Creek Really A Creek?

While driving over the bridge leading into historic Bath most guests are amazed by the expansive waterway that captivates the eye in both directions.Upon arrival at the Inn we are often asked…..It says Bath Creek, but this is not a creek. Is it?

Being on and around water can be soothing and relaxing, so does it matter if the water lapping against the bulkhead in historic Bath is a river, a creek or a stream? When it comes to relaxation, probably not. Truth be told, the creek reference most likely comes from a bit of history and some ambiguity. So don’t let the nomenclature stress you out.

What is the Difference Between a Creek, a Stream and a River?

Looking out on Bath Creek one would think it’s more like a river than a creek. So, what then differentiates a creek, a river and a stream from one another? They are all names for water flowing on the Earth’s surface. Per the United States Geological Survey, the terms are pretty much interchangeable.

While there are no strict definitions to distinguish these waterways from one another there are some general guidelines. Most would agree a river is the largest with a creek being the smallest and stream refers to any body of flowing water.

What is a Creek?

A creek can be defined as a small body of flowing water. However, there are exceptions. Raccoon Creek in Ohio is 112 miles long according to the Ohio University’s watershed.com database. This is longer than many rivers.

The meaning of the term ‘creek’ also varies from one geographical area to the next. In British English,’Creek’ refers to an inlet or bay where ships can find shelter from the sea. In North America a creek is a small or a medium size stream or a tributary of a river. Creeks are generally shallow in depth and flow into a large body of water.

What is a Stream?

A stream can be used to refer to any flowing body of water. The United States Board on Geographic Names defines a stream as a linear flowing body of water flowing on the Earth’s surface. According to this definition, many generic terms including brook, creek and river fall under the category of streams.

What is a River?

A river is a large flowing stream that forms from water moving from a higher elevation to a lower elevation, due to gravity. When rain falls or ice melts, it either seeps into the ground or becomes runoff which flows downhill. Initially it may find its way to small creeks which lead to rivers and eventually the ocean or lakes. 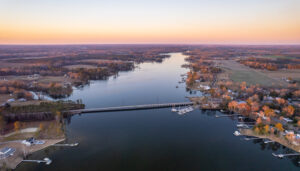 35.4771° N, 76.8116° W is Bath, NC. Approximately 50 miles off the Atlantic Ocean, Bath forms a peninsula hugged by Bath Creek on one side and Back Creek on the other. Both creeks flow into the Pamlico River.

Bath Creek is approximately 7 miles long starting from HWY 264 to where it meets the Pamlico River. Picturesque views of the Bath Creek are visible as you wander through this Historic town.

How Did Bath Creek Get Its Name?

The Europeans settled around the Pamlico River in the 1690’s. This led to the founding of Bath, North Carolina’s first town in 1705. Bath was named after Englishman John Granville, the Earl of Bath.

When Bath Creek was founded, the term “creek” stemmed from old English. In England, “creek” referred to an inlet or bay where ships can find shelter from the sea. Settlers from England and Scotland brought the term with them when they travelled to America.

Then in 1708 Bath became North Carolina’s first port of entry.Ships travelling from England stopped in Bath to trade and restock supplies.Pirates were said to find Bath Port a safe haven due to the inlets and shelter that allowed them hiding locations from the British Navy.

Given the bay-like appearance and the shelter Bath Creek provided with its many inlets, the old English term “creek” seems to describe Bath Creek quite well.

The longest creek in the world is Billabong Creek, located in New South Wales, Australia. It is an estimated 370 miles long.

The longest creek in the United States is Lodgepole Creek in Wyoming, Nebraska and Colorado. It is estimated to be 278 miles long.

The most deadly creek according to the NYTimes is the Bolton Strid. This creek in England has claimed many lives due to its narrow, deep water with dangerous rocks.

Regardless of its definition, Bath Creek has as much history as the quaint historical town it borders. When visiting, look out from Bonners Point and imagine merchant ships from the 1700’s sailing into Bath Port full of rum, salt and molasses.

Now, really let your imagination go and visualize pirate schooners rounding the corner as they head into Port. At one time in history there were 20 pirates living in Bath. AARR!