Welcome to the Inn on Bath Creek

5 Things You Should Know About Blackbeard of Bath

Blackbeard – Bath’s most notorious occupant was a plundering scoundrel, but he certainly left his mark. Here’s 5 pieces of gold to wet yer treasure hunting appetite before you come to visit… 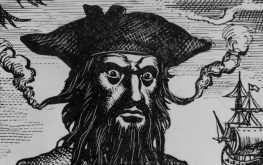 We hope you enjoyed this bounty! The spirit of Blackbeard certainly still lives on in the area and and there’s still so much more to find out. In the area you will find ghost walks, historical markers, sightseeing tours, talks, the NC Maritime Museum and plenty more to fill yer boots with whilst here. Book your room now.