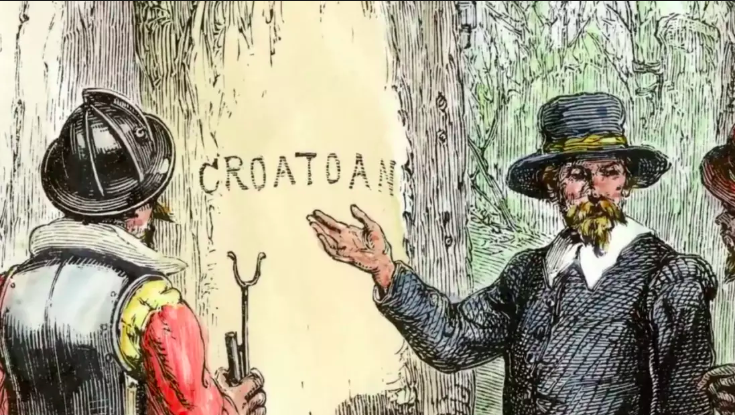 The Mystery Of The Croatoan

Given the ghostly time of year – with all hallows eve approaching we thought the local spooky tale of the  Croatoan “lost colony” would get you in the “spirit”.

This true story is a mystery from our North Carolinian history dating back to 1587 – it begins with the word CROATOAN carved into a tree and the disappearance of 115 people. It’s even been noticed by American Horror Story who seem to be including it in their sixth series.

In 1587 Hatteras island was known as Croatoan Island, its native tribe the Croatans. It’s about 80 km southeast of Roanoke, which is where the second attempt at establishing an English colony on American soil was located. At some point between late 1587 and August 1590 the entire population of 90 men, 17 women and 11 children vanished. Leaving only the word CROATOAN carved into a tree and ominously the letters CRO scratched into another. The mystery still remains unsolved.

The colony had met hostility from the Secotans tribe and their supplies were running low. Leader John White sailed back to England for help. He left behind his daughter and newborn granddaughter, whom he would never see again. When he left he had no idea he would be delayed in his return by almost 3 years due funds and the war with the Spanish. Or, that he would become the only known survivor of the “lost colony”.

He landed back at Roanoke on his granddaughters birthday but found nothing – other than the dismantled buildings and that message on the tree. There were no animals or belongings nor any bodies or evidence of battle or massacre.

He returned to England without investigating the Croatoan tribe – there is no given explanation for why.

Is it possible that the colony travelled and absorbed into the Croatan tribe? Archeological remains found from that area and from a site 80 km northwest and inland of Roanoke are being studied to try to answer that question.

Did they meet tragic ends? Gruesome suggestions range from cannibalism, disease, massacre and a failed attempt to sail back to England.

Here’s where it gets more eerie…

The Croatans were said to believe in a malevolent spirit from their land who could change people into animals – or trees!

And in these more recent mysteries, where the word CROATOAN appears – people disappear.

Is that spirit leading people to their doom, is it a strange coincidence, some secret society or long standing hoax? Could it just be a fascinating story that intrigued these people and drove them to isolation?

Will we ever know? So far, all attempts by historians, explorers and archeologists have fallen short.